The discovery of a Navajo masterpiece.

The weaving of wearing blankets is part of the Navajo (Diné) creation story, present in Navajo culture from the beginning. Spider Woman, who wove the web of the universe, taught the Navajo people to weave. She is present in their lives today, residing atop Spider Rock in Canyon de Chelly. 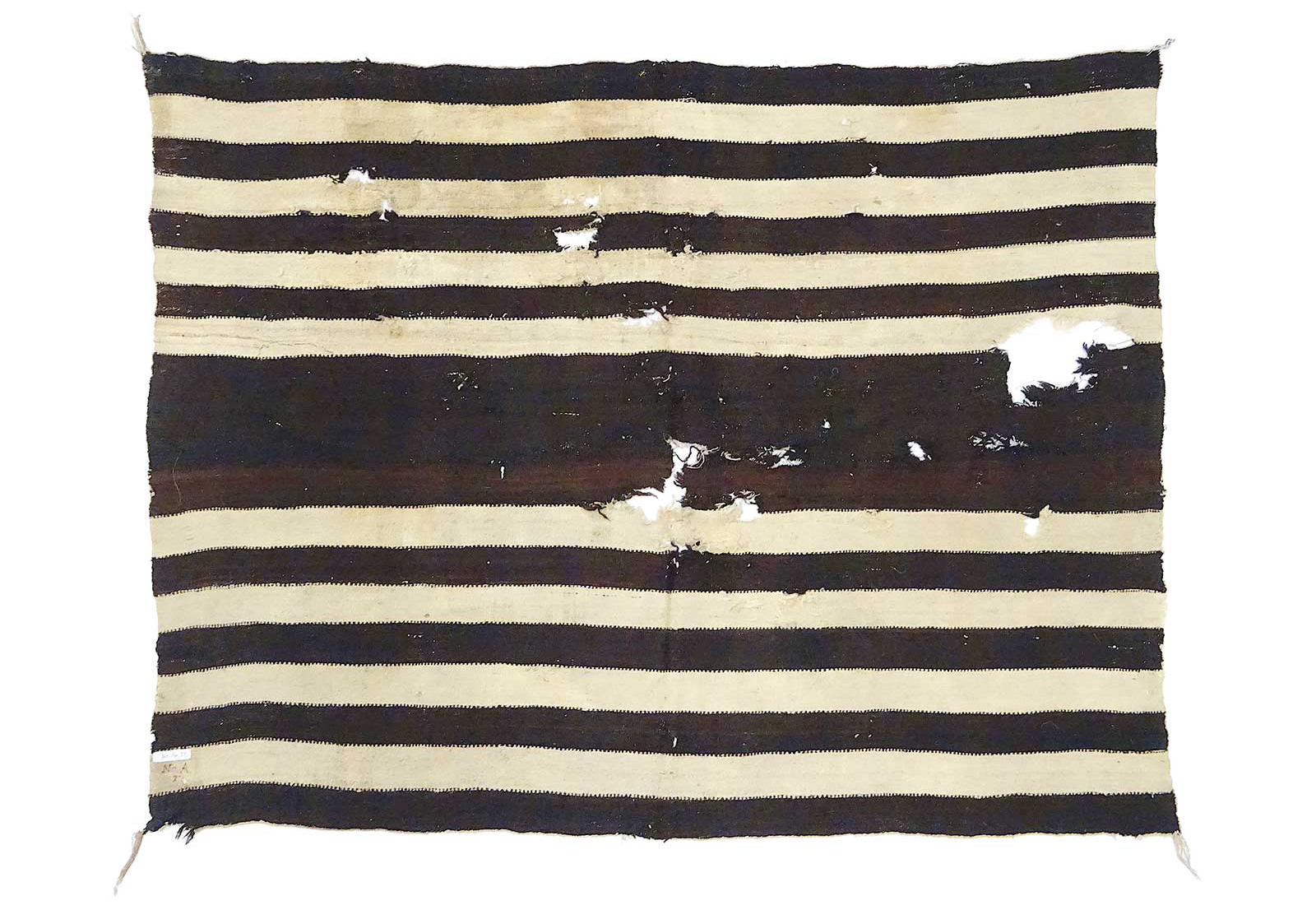 The Navajo philosophy of Sa’ah Naaghai Bik’eh Hozhoo guides life in balance and in harmony with the natural world and the universe. Balance occurs in the physical world with a reverence for the four cardinal directions, the four sacred colors and the four sacred mountains that border Navajo Country.

Balance is the theme of the Beauty Way Chant, part of which reads:

To the south of Navajo Country, or Dinétah, were the Hopi. To the north were the Utes. Navajo wearing blankets were admired by the Hopi and Utes, who bartered with the Navajo for their blankets. Navajo blankets woven longer than wide were called “serapes” by the Spanish. Navajo blankets woven wider than long were called either “chief’s blankets” or “mantas.” The term “chief’s blanket” came into use because chief’s blankets were expensive. Only the high-ranking members of the Utes and the Plains tribes could afford them. According to Joshua Baer, an appraiser of Navajo blankets in Santa Fe, “Anglo-American explorers and military officers began collecting Navajo chief’s blankets during the 1840s. Between 1840 and 1860, the rate of exchange for one chief’s blanket was either 10 buffalo hides, 20 horses, or $50 in gold. In 1850, $10 was one month’s pay for a cavalry officer in the U.S. Army. The $10 gold piece, or ‘eagle,’ contained one-half of one ounce of gold.” 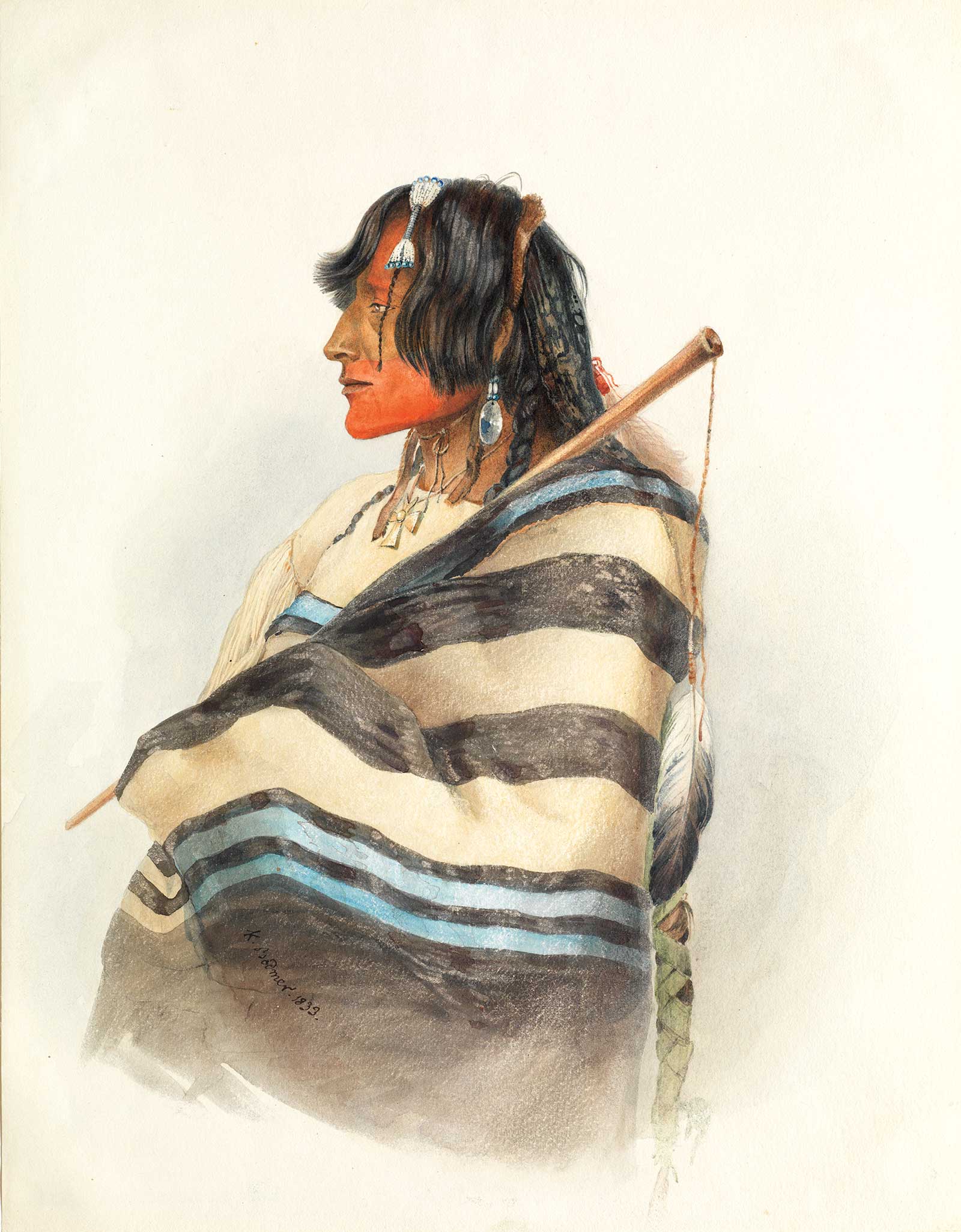 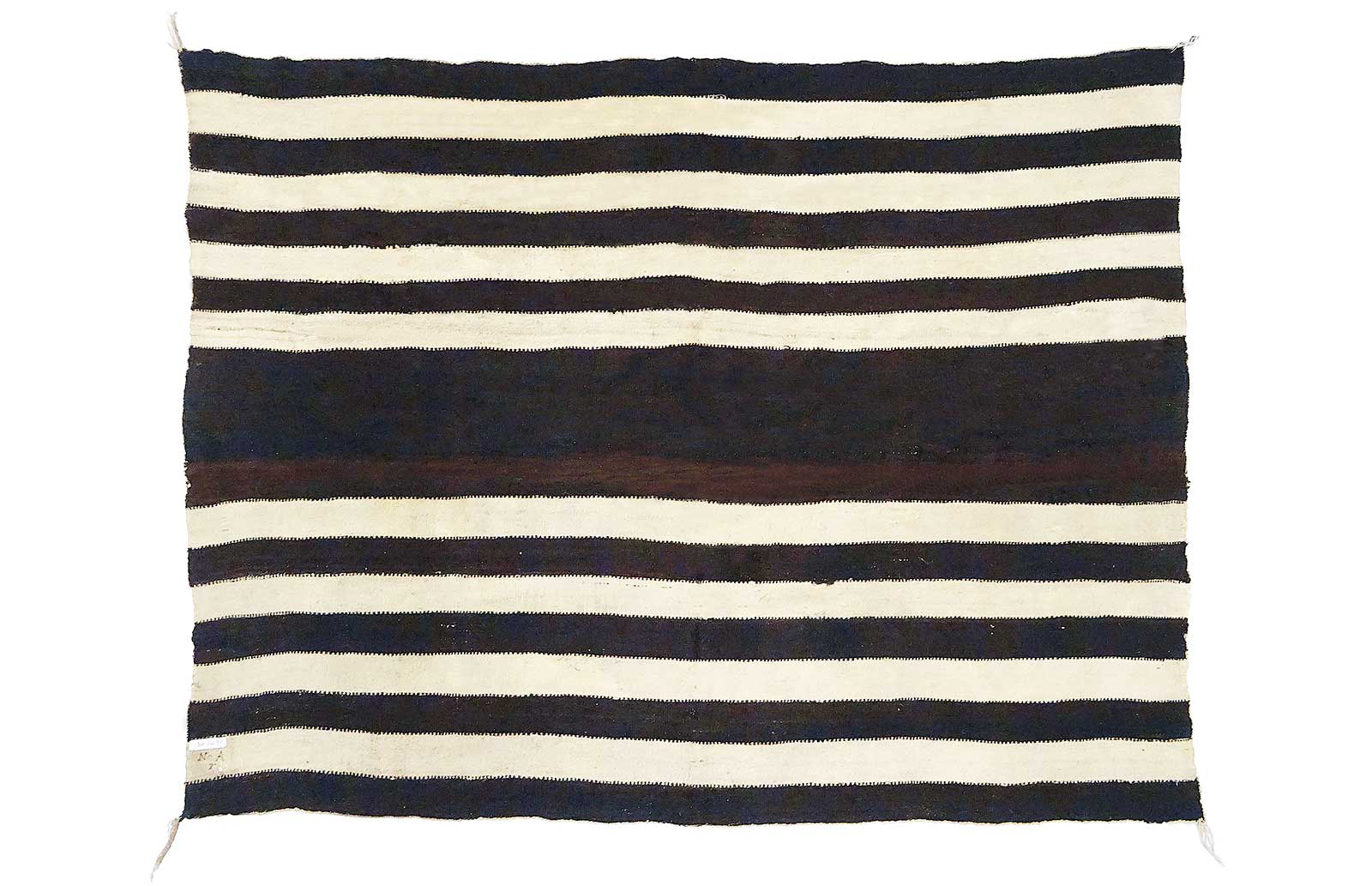 An Early Classic First Phase Chief’s Blanket, Diné (Navajo), circa 1830, also known as the Schoch First Phase. The first phase measures 54 inches long by 73 inches wide, as woven. In the collection of the Bernisches Historisches Museum (BHM), Bern, Switzerland, by purchase from Marie Karolina Ruef, Lorenz Alphons Schoch’s widow, 1890. BHM Catalog #1890.410.0027. Cataloged by BHM as a “Sioux trade cloth.” The image has been enhanced to show how the first phase may have looked in original condition.Photograph by Joshua Baer. © 2021 Joshua Baer & Company, Santa Fe. Used by permission. All reproduction rights reserved.

In response to Spain’s attempts to monopolize cochineal, the British developed a red dye from lac, a scale insect found in Bengal. Red bayeta cloth was woven and piece-dyed in Seville, Spain, and in Manchester, England, then exported in bolts to North America. Bayeta was then shipped from ports in New Orleans and Charleston to St. Louis where it was transported by mule to merchants in Santa Fe, Taos, and the Chama Valley. When bayeta arrived  in Navajo Country, Navajo weavers raveled the woven cloth to obtain red yarn to weave into their blankets. Between 1830 and 1860, bayeta was Navajo weavers’ primary source of red yarn. Navajo weavers also used a red knitting yarn from Germany, known as Saxony. 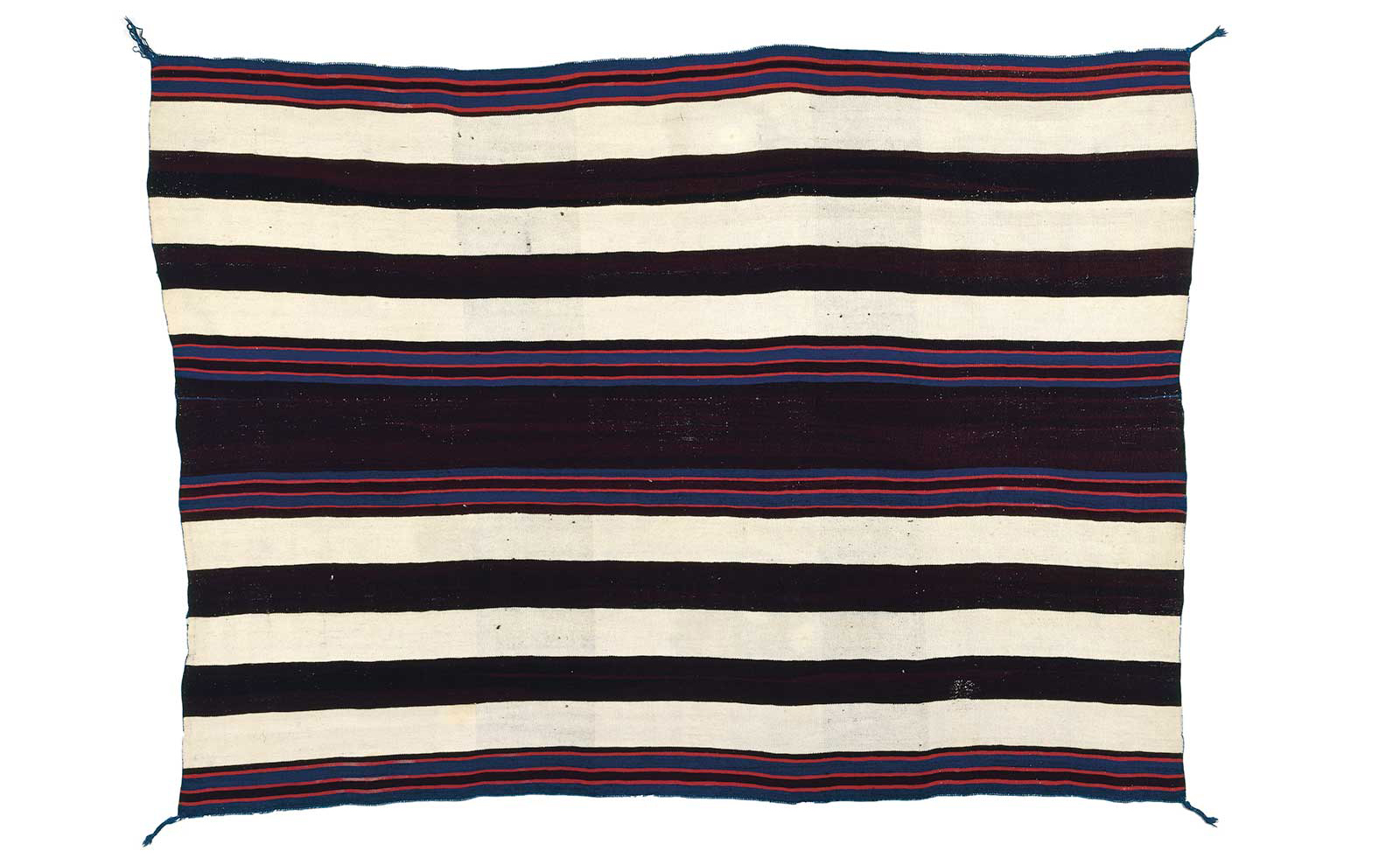 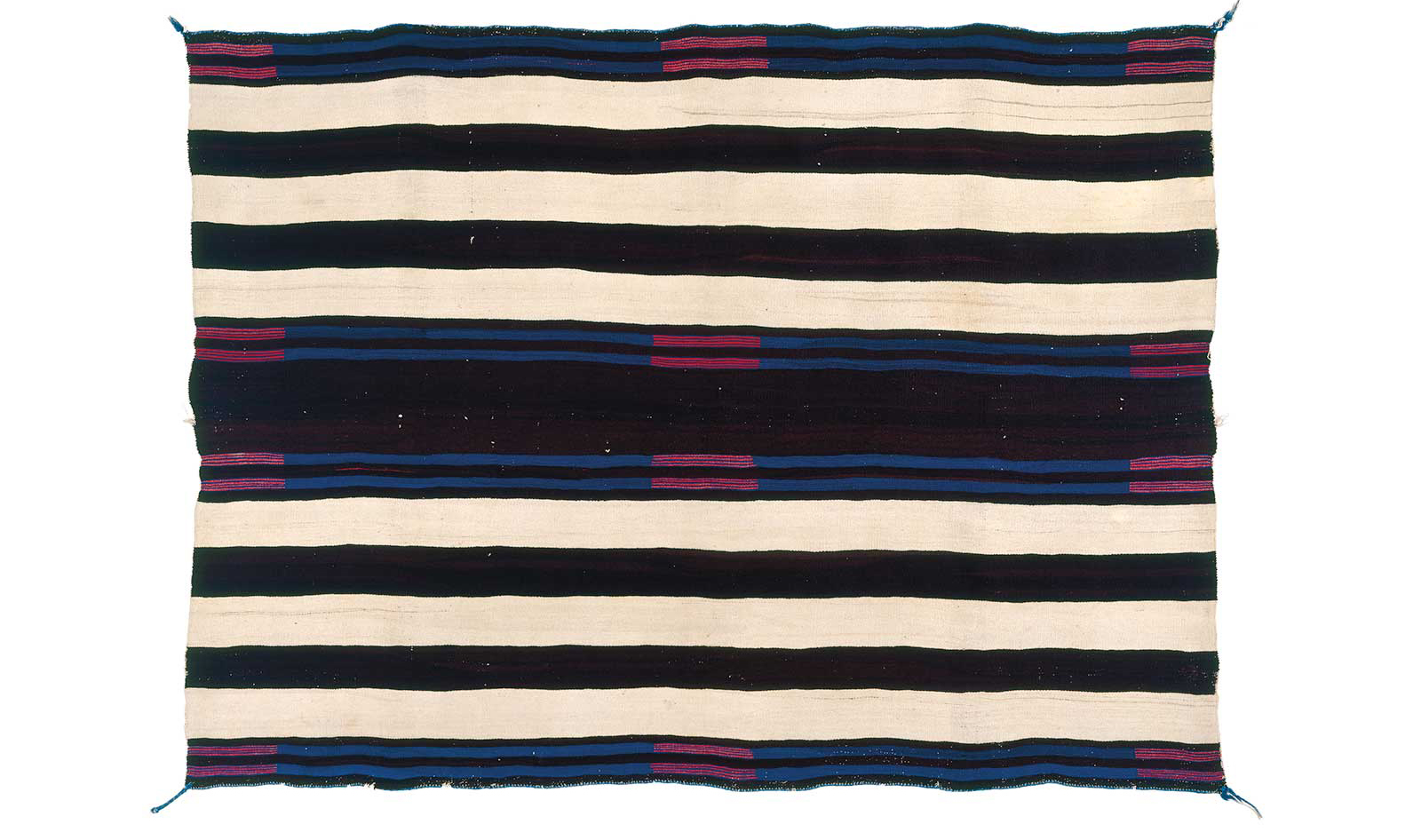 The Nelson-Atkins Museum describes its first phase blanket as “a broad horizontal configuration of contrasting and subtly colored bands…often described as a distillation of the Navajo’s desert plateau and mountain landscape.”

A characteristic of Navajo looms is that they were often set up outdoors where the weavers looked through them at the landscape as they worked.

The widespread trade in chief’s blankets is documented in a watercolor by Karl Bodmer (1809-1893), a young Swiss artist who accompanied the Prussian naturalist Prince Maximilian of Wied-Neuwied (1782-1867) on an expedition through the Missouri Valley from 1832 to 1834. Prince Max, as he was known, believed the Indigenous tribes of central North America were on the verge of extinction. He had set out to document their cultures before they disappeared.

Bodmer was a prodigy who would amaze audiences by creating an accurate sketch or watercolor in less than an hour. Prince Max would often use him to impress the people they met on their expedition. In 1833, on one leg of their journey, Bodmer painted Kiasax, a Piegan Blackfoot chief, wearing a Ute style first phase chief’s blanket with pairs of blue stripes. It is the earliest known painting of a Navajo chief’s blanket. 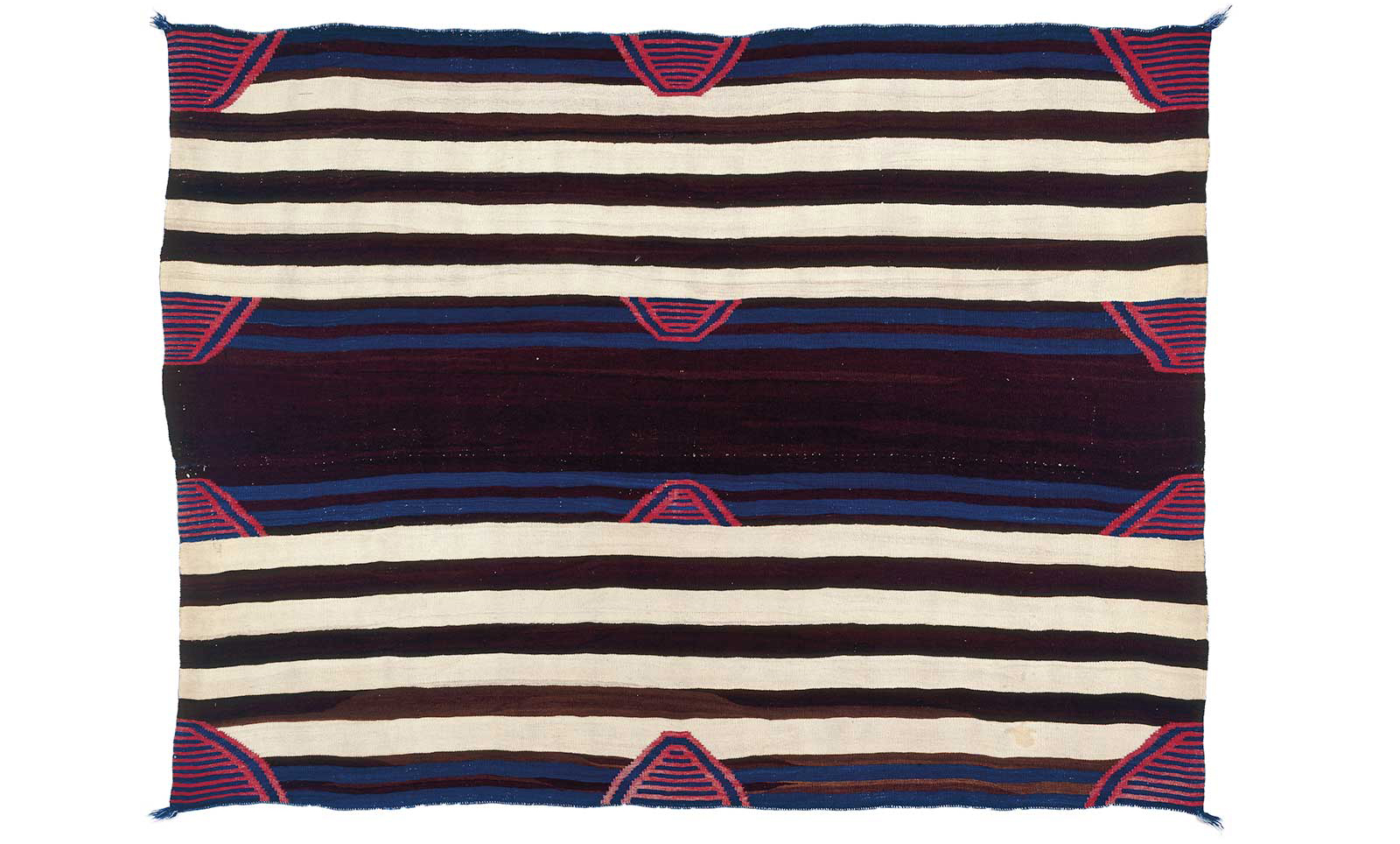 Prince Max’s choice of the scrupulously accurate Bodmer resulted in some of the finest paintings of the region and its people. The prince was as meticulous in his written descriptions as was Bodmer in his paintings and drawings. In a journal entry from March, 1833, he describes Massika, a Sauk man he met in St. Louis. “The area surrounding the eyes and ears is red, often also the cheeks; with others the entire head is completely red, except for a white spot on the forehead and a black one around mouth and chin; this gives them a dreadful appearance…Their ears are pierced along the upper edge with three or four holes, and from them hang short strings of blue and white wampum, like tassels.” 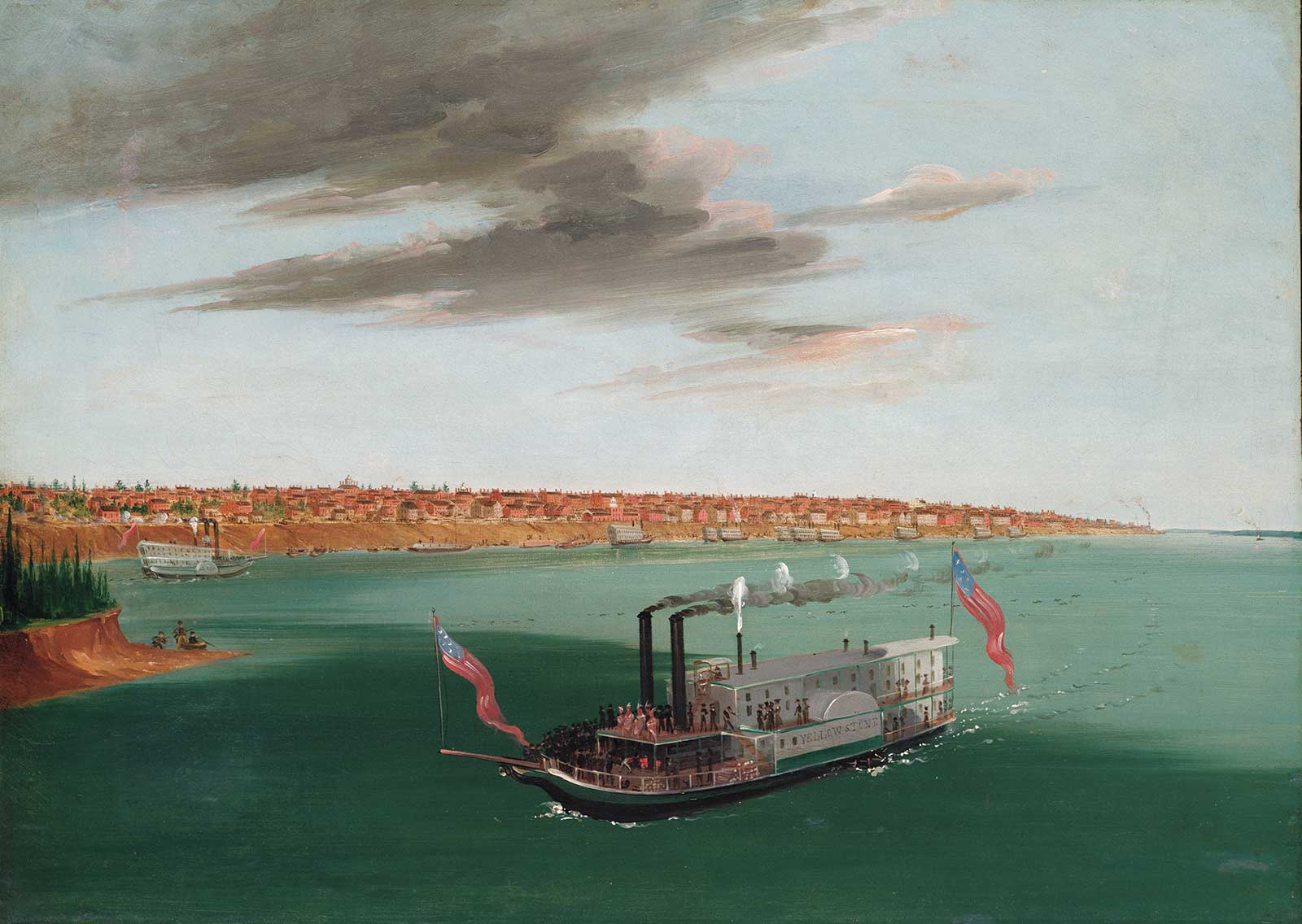 Prince Max’s collections were dispersed in museums in Bern, Berlin and Stuttgart.

George Catlin (1796-1872) traveled to the West five times in the 1830s, painting portraits of its Indigenous people and amassing artifacts from their cultures. He wrote in 1841, “St. Louis…is a flourishing town, of 15,000 inhabitants, and destined to be the great emporium of the West…[It] is the great depot of all the Fur Trading Companies to the Upper Missouri and Rocky Mountains, and their starting-place; and also for the Santa Fe, and other Trading Companies, who reach the Mexican borders overland, to trade for silver bullion, from the extensive mines of that rich country…I have also made it my starting-point, and place of deposit, to which I send from different quarters, my packages of paintings and Indian articles, minerals, fossils, etc., as I collect them in various regions, here to be stored till my return; and where on my last return, if I ever make it, I shall hustle them altogether, and remove them to the East.”

Lorenz Alphons Schoch traveled from Switzerland to St. Louis in 1832 and collected between 1833 and 1837, at the same time Prince Max and Bodmer were on their expedition and Catlin was collecting artifacts. Schoch was the son of a Swiss instrument manufacturer. Among the artifacts he collected is a war shirt that appears in George Catlin’s painting Mix-ke-móte-skin-na, Iron Horn, a Warrior, 1832. 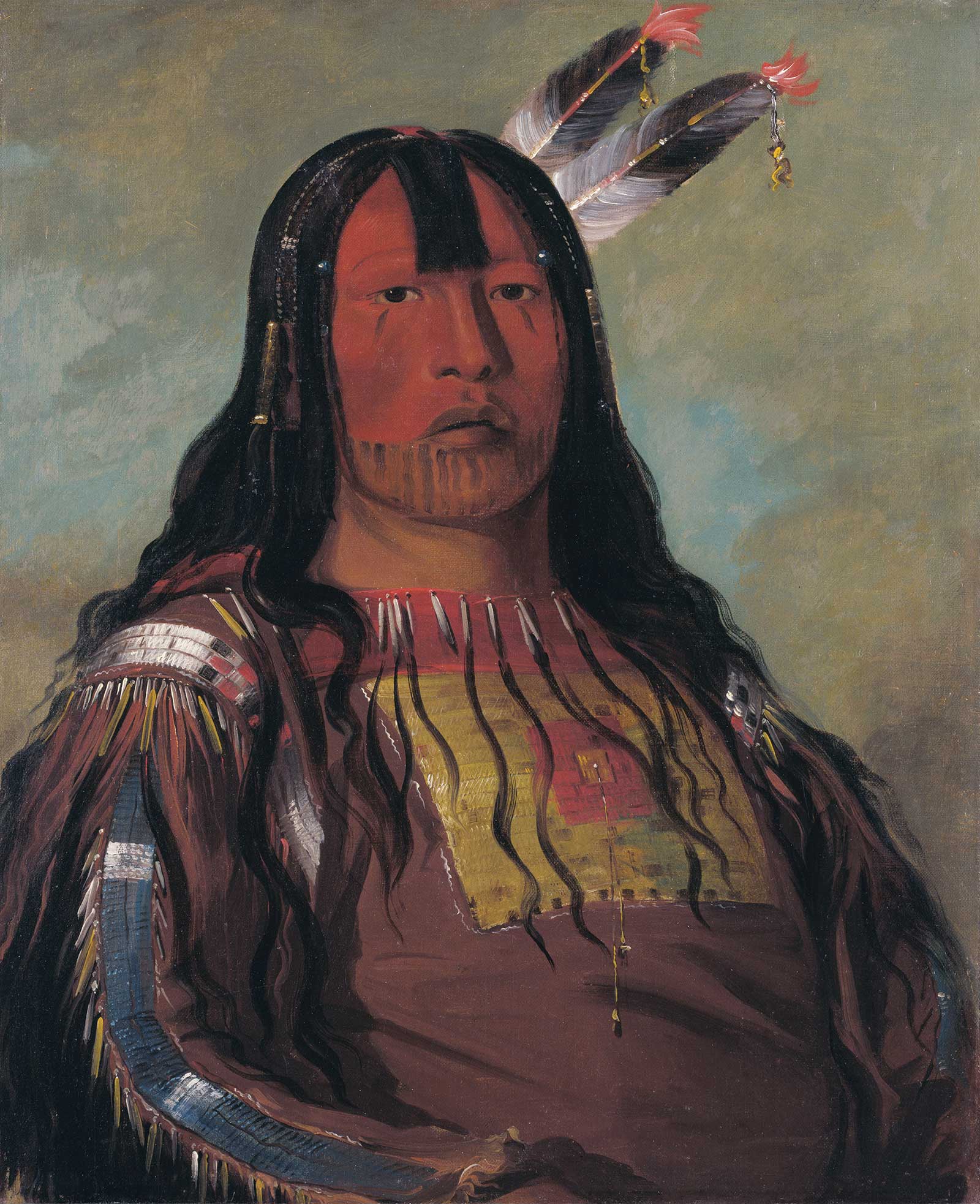 Judy Thompson wrote The North American Indian Collection: A Catalog for the Berne Historical Museum in Switzerland. She comments, “Although European trade goods had reached the Plains area by the early 1700s, Plains Indians had little direct contact with white men until the mid-19th century. Collections as early as the Schoch material (1837) are therefore rare. Lorenz Alphons Schoch (1810-1866) was a Swiss from Burgdorf, Canton Berne. He went to the United States in 1832, where he lived in St. Louis for several years and apparently came into contact with various Indian tribes in his role of merchant or trader. Schoch returned to Switzerland in 1842. His collection was purchased from his widow in 1890.” 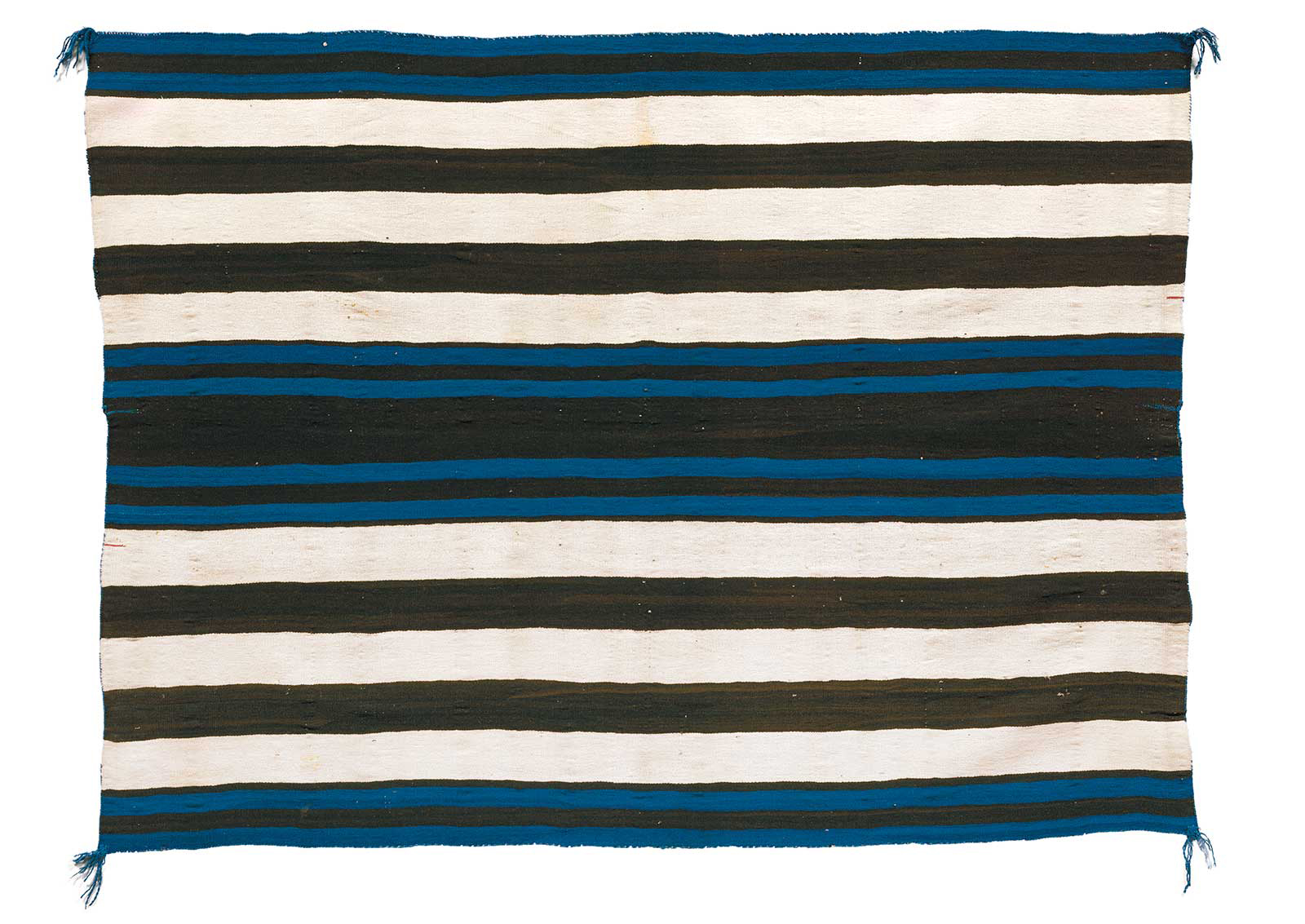 Another item in the Schoch collection in Berne is a blanket cataloged by the museum as “Sioux Trade Cloth.” Baer believes it is the earliest documented example of a Navajo first phase chief’s blanket. It is illustrated here by his interpretation of the item if it is restored. He bases his hypothesis on five criteria: