“Wow!” That’s usually the first word said when someone looks at this stunning piece created by Navajo master weaver Marian Nez. “That’s incredible!” usually follows as people look at this pictorial piece measuring 35 by 48 inches. Spider Rock, one of the holiest landmarks in the Navajo culture, appears to be painted with Churro wool while next to it is a guardian Yei sand painting. The two images are blended into one weaving, carefully and artistically brought to life. The piece was actually started in 2017 by Helene Nez, also a master weaver, who is one of Marian’s seven sisters. Steve Getzwiller—owner of Nizhoni Ranch Gallery in Sonoita, Arizona, and a long-time collector and trader with many master weavers—asked her to do one with Spider Rock, sending her pictures of the landmark in Canyon de Chelly. “She thought it was too plain, and said, ‘Let me do it my way’” says younger sister Cecelia Nez. “The sand painting was (put in) because she didn’t want to do the whole picture as a landscape.”

Getzwiller, who has been working with two generations of Nez family weavers since the early 1980s, chuckles about that. “I just let her do whatever she wants,” he says.

While Helene did start the piece, she abruptly stopped early on and moved away. Cecelia eventually took it off the loom and put it aside. 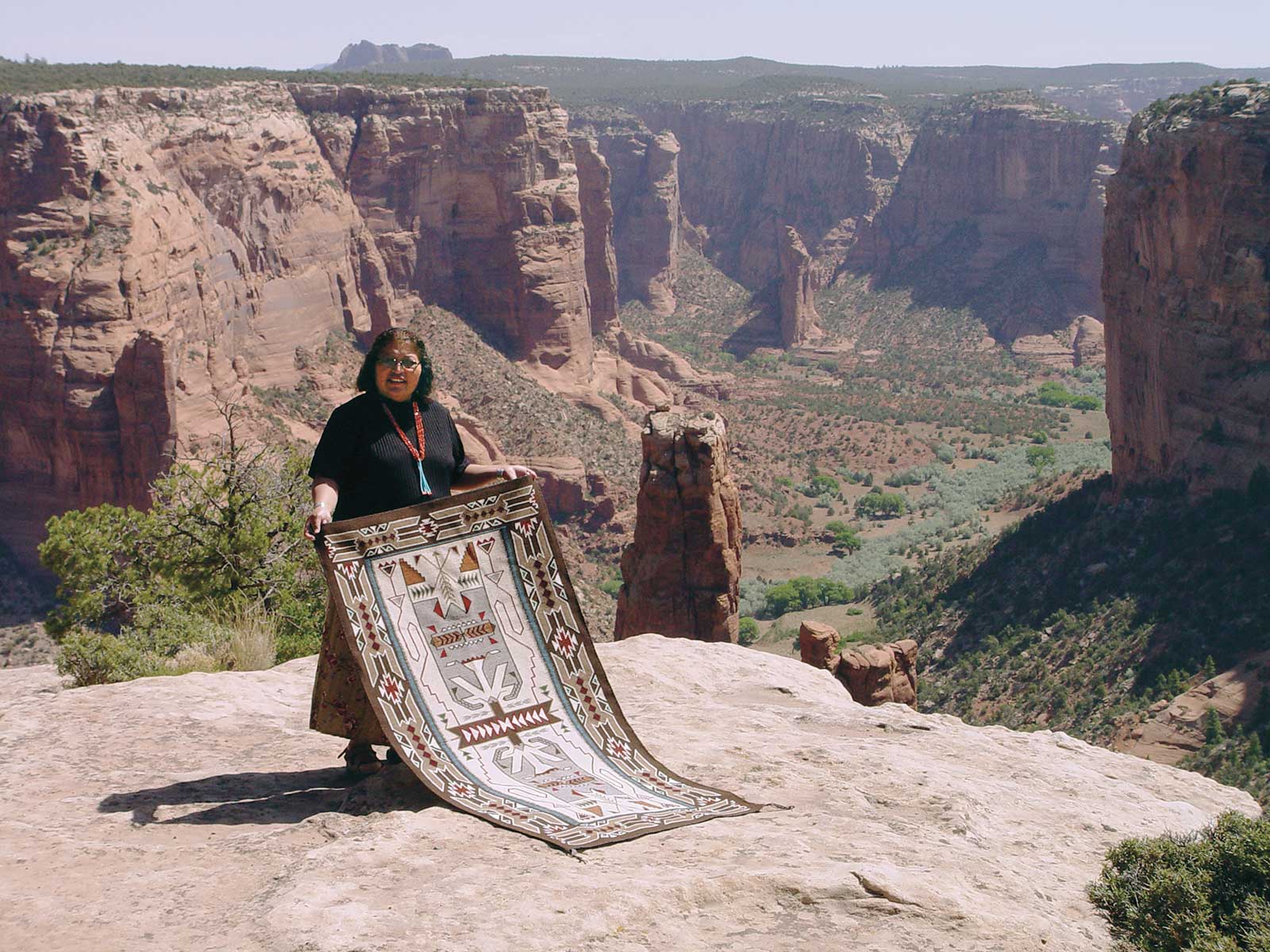 In early 2020, Marian was living and working in Winslow. Covid hit, her job went away and she moved back home with her sisters in Navajo Nation. She had not been weaving full time for years and was looking for something to do. That’s when Cecelia remembered the unfinished Spider Rock piece.

“So I set it up for her and showed her how to start…and she did it a lot better than I would have!” Says Cecelia, who is herself an award-winning master weaver. “Marian’s so artistic. She’s very good at what she does.”

“Once I started, it was pretty simple,” says Marian. “It was just slow…there weren't any shortcuts.
I finished in five or six months.” 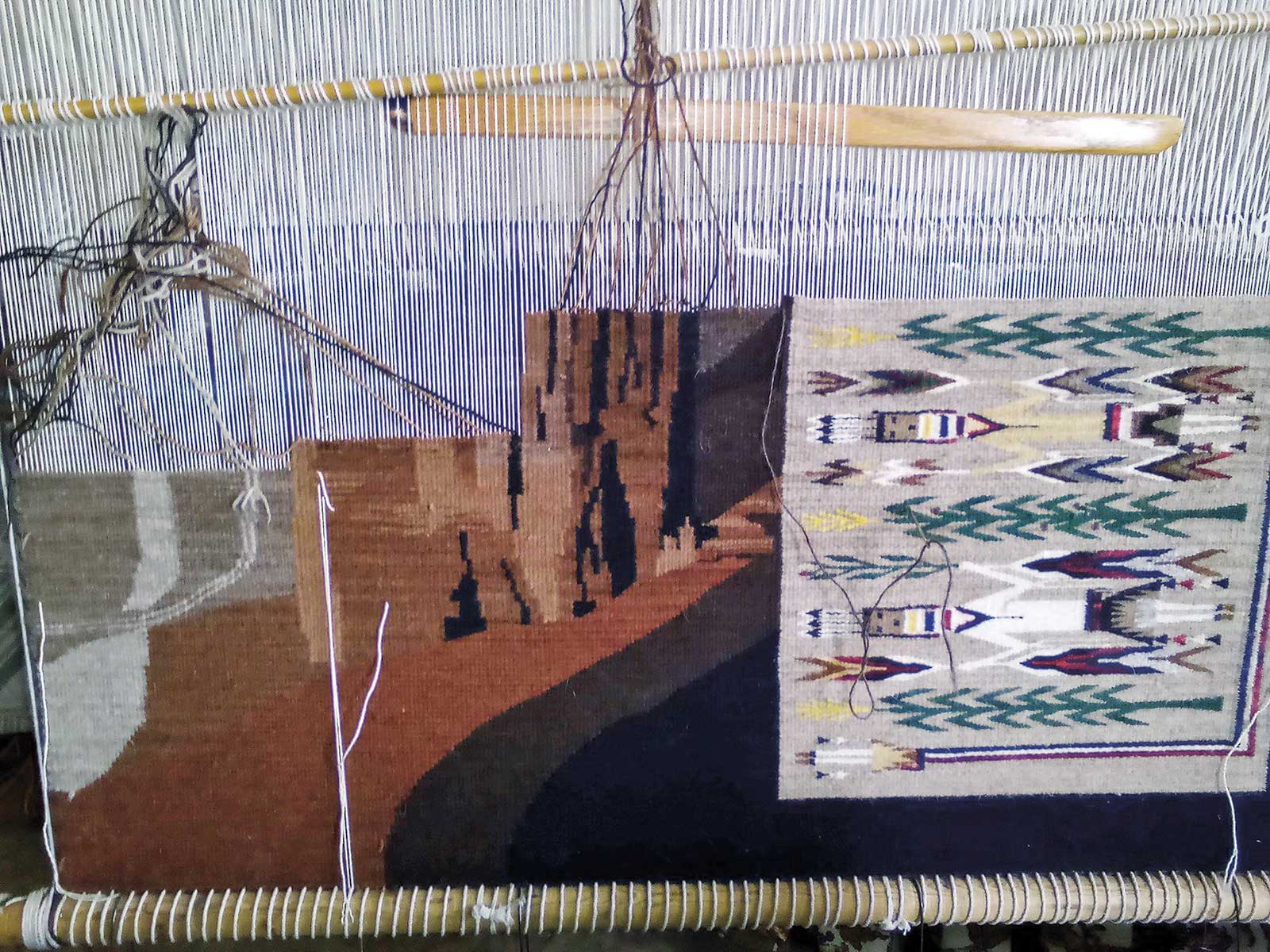 When she first saw it, there were only a few inches completed. There wasn’t much of Spider Rock and only two Yeis on the sand painting. “I did part of that road that goes by that rock. And then it goes all black on the side. That’s around where I started from.” And she just kept going, developing her own rhythm, from the sand painting to the towering stones and back again. “It wasn’t that hard to me,” she says.

But it wasn’t that easy either, as she focused so intently on the colors, not just of Spider Rock, but of the background as well. It’s Marian’s attention to detail that grabs you as you gaze upon it, where you think you could reach out and touch it; feeling the grit of the red sandstone on your fingers. 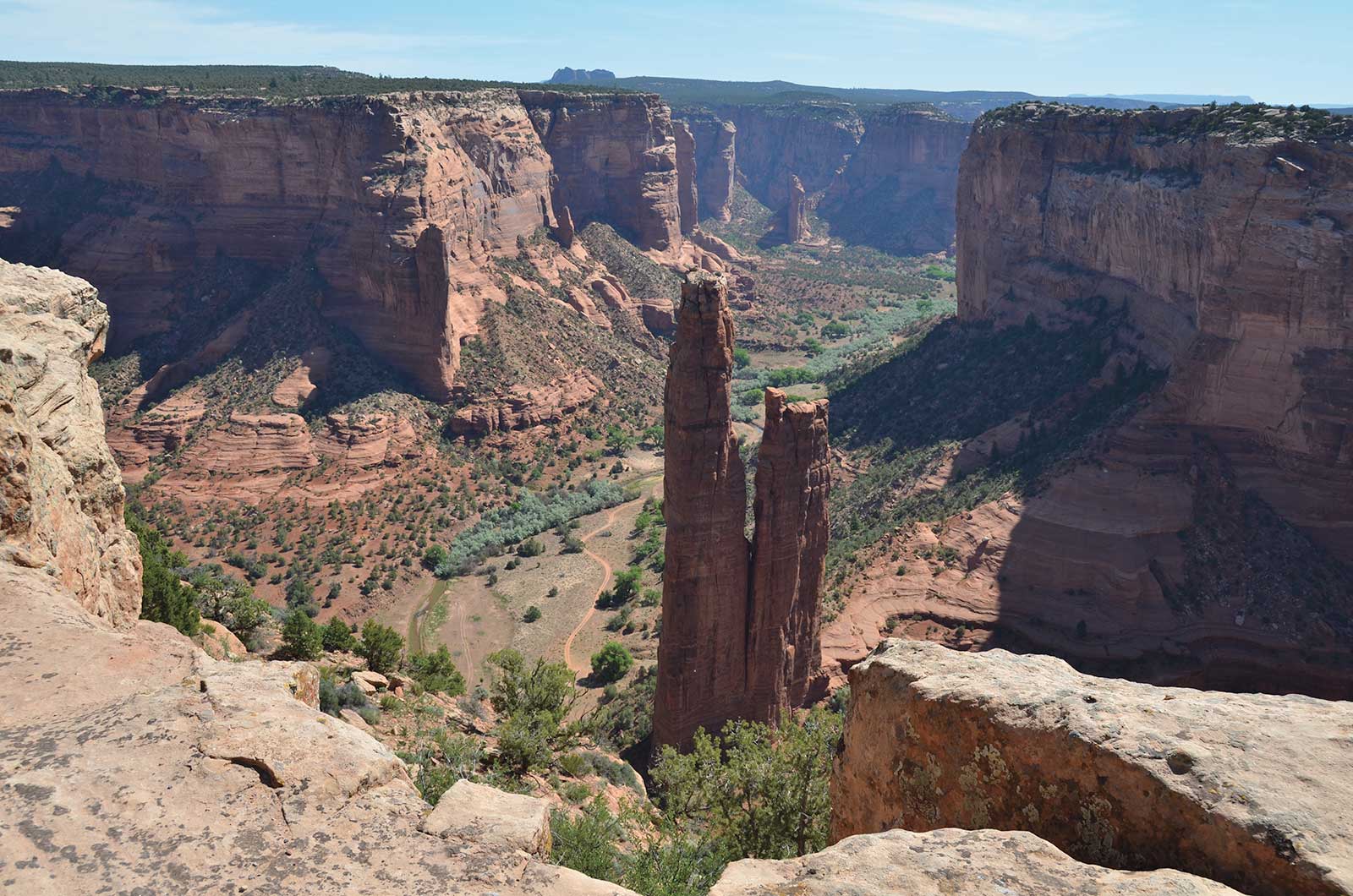 The spires of Spider Rock reach up to the skies over Canyon de Chelly. This is considered one of the holiest places in Navajo culture, where Spider Woman, one of the highest deities, lives. It was Spider Woman who taught the first Navajos how to weave, and that came after she wove the universe. Photo courtesy of Nizhoni Ranch Gallery.

“I had a photo of it, so I had to use a magnifying glass to look at all the shapes and rocks, and that’s how I did that,” explains Marian, when asked about the depth and shadows of the rock formations and the canyon. “I used all different colored yarns, all different shades.”

Navajo legends say Spider Woman lives at Spider Rock, and was the first to weave the web which became the universe. She taught the Diné, the Navajo people, how to weave, how to create beauty and bring balance to their lives, and how to sing the weaving songs. These are all passed down through the generations, as they were to Marian and her sisters from their mother, Grace Nez, and grandmother.

Marian remembers in her childhood, when her mother had a piece up on the loom and had to occasionally step away. “When my mom would go to town, I used to take a small piece (of the weaving) out, and then put it back in before she came back,” she says, with a smile in her voice over this memory. “That’s how I learned.”

These are lessons she obviously learned well, because while she was already considered a master weaver, this textile “painting” of Spider Rock earned Best in Textiles this summer at the Gallup Inter-Tribal Ceremonial.

Marian is back to weaving full time again, and while she’s currently working on a Teec Nos Pos weaving this fall, she already knows what her next one will be. “After that, I’m going to redo Spider Rock again without the Yeis rug. That’s my next project and I need a lot of yarn.”

Steve Getzwiller is already on that. “I got a special dye batch done so that rocks look like rocks. That’s the amazing thing about her weaving in that it looks so realistic.”